My assignment as the game designer was to create a public space game that use existing locations to reveal historical facts around Turkish influence on Viennese culture.

After initial research the game was developed for the two very different areas 16th and 18th district of Vienna connected by tram line 9.

The 16th district Ottakring hosts Yppenplatz and Brunnenmarkt Viennas most well functioning street market. The area merges food, culture and people from everywhere with hipp cafés and a strong neighbourhood movement. The 18th district is a beautiful upperclass residential area on historical grounds important to the defeat of the Ottoman Siege in 1683 and the "Türkenschantzpark". 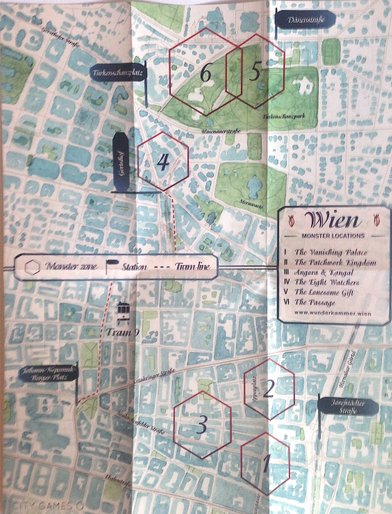 With a good portion of everyday magic the game reveals clues to how stereoptype good and bad can be dismantled and how Viennese national culture is ongoingly influenced by its immigrating and migrating people.

To find out more about City Games visit their Website: